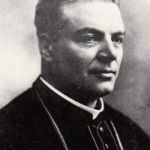 He was born in Val di Non, he was bishop and archbishop of Trento. He studied theology in Rome, where he could get in touch directly with the principles the catholic Church of the time was approaching, that were those connected with the so-called ‘social issue’. After hecaome back to Trento, he participated pro-actively in the creation and activities of the catholic associations of the province; he was in fact promoter of the creation of the diocesan Committee of Catholic action. He was elected councillor of the Federation of cooperative Consortia and part of the direction of the credit institutions.

He became bishop of Trento in 1904, with the intention of continuing the improvement of material and spiritual life conditions of the population, flanked on a coordination and material organisation level by the collaborator Guido de Gentili. Endrici, in approaching the society, stressed the need to read its fields (religious-moral, political-civic and economic) with a global comprehensive approach. Faith, thereby, was a ‘social religion’; aimed at bringing earthly prosperity (approaching the Degasperian concept of social energy of Christianity).

This connected then Endrici’s support to the different cooperative organisations on the territory. Despite his position of mediation and attenuation of nationalism on both sides, during the Great War, he was forced to leave Trento, to come back again once the conflict was over, contributing to the revitalisation of the catholic associations and to the reconstruction works. He became archbishop in ‘29 until his death in 1940.