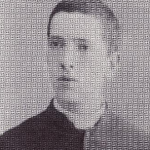 He was a priest, a tight collaborator of Celestino Endrici and a catholic movement prominent figure in Trentino at the beginning of early twentieth century, during the blooming season of social and cultural initiatives, contemporary of the social Encyclical Rerum Novarum by Leone XIII. Between 1898 and 1905 de Gentili was director of the periodical “La Voce Cattolica” and from 1905 he was president of the diocesan Committee for the catholic action, guide and coordination of associations and initiatives of the catholic world. De Gentili strengthened the press and information sectors and he engaged in the coordination of economic institutions connected to the catholic world.

He was councillor of the Federation of cooperative Consortia during the ‘20s. He was elected to the Assembly of Innsbruck and to the Parliament in Vienna, defending the autonomy of the territory and the promotion and protection of the Italian culture.

He became a key character of the catholic world in Trentino also after WWI, together with the transition of the territory, now part of the Italian State. These were years of change and difficult adjustment to the new political situation of the country: de Gentili, with the arrival of the fascism, acted for the defense of the world of associations and cooperatives without nevertheless succeeding in counteracting the fascist violence that occupied and controlled the bureaucracy developed so far.