He was born in Mezzolombardo, he studied in Monaco and Innsbruck and after he was professor in Trento and Rovereto. He interpreted the cooperation, together with the extensive education, as a possible solution to the social issue and the widespread poverty.

He was president of the agrarian Consortium in Vezzano, one of the biggest in Trentino; he was among the founders (1984) of the Cooperative Society for the purchase of agrarian provisions and of the Credit Institution in Cadine. He was a professor, friend and supporter of don Lorenzo Guetti, he was vice president of the Federation of Cooperative Consortia, striving for the promotion of the cooperative movement through its media outlet, the ”“Supplemento al bollettino del Consiglio provinciale dell'Agricoltura per la Federazione dei Consorzi Cooperativi", that then became “La Cooperazione trentina”.

He also worked hard for the creation of courses for managers and employers of the cooperative societies. He is remembered as a SAIT forerunner, following the English example; he was in fact a strong supporter of the importance of the creation of a central food warehouse. Colombini was an exponent of the neutral tendency, that is non denominational, within the Federation of Cooperative Consortia, that he left indeed following the Congress in Mori, during which the confessional tendency prevailed.

According to Colombini the social issue could find a solution only in the cooperation, as he explained during the courses for the cooperative members:”it is not by diminishing the belongings of the rich, but by increasing the fortune of the poor, with the social issue aiming at economic justice, transforming it from individualistic and capitalist into solidarist. By helping the less privileged, the land and factory workers, to get what they need at the best quality and price conditions, and by educating them at the same time in saving, they can escape so many deprivations, so many dejections“.

Following the death of don Lorenzo Guetti, Colombini highlighted the responsibility of cooperative members of the time to foster and maintain the memory of their master and pioneer, suggesting by the words of God, homeland and neighbour, the three cornerstones of mutuality and Cooperation. 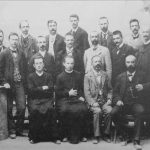 (In the photo with the accounting secretaries of the credit institutions)