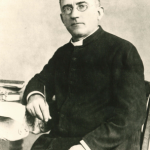 Don Lorenzo Guetti was born in Vigo Lomaso on 6th February 1847, he was the son of Girolamo e Rachele Molinari (photo). He was a son of farmers, he would be destined for a life in the fields. However the family’s deep faith and the presence of two priests, Lorenzo senior and don Pietro, brothers of his dad, directed the young boy towards a priestly life. Lorenzo was ordained in 1870 and he celebrated his first Mass in Vigo Lomaso in the Giudicarie Esteriori valley (photo). On 3rd September 1870 he was assigned as a colleague to the priest of Terragnolo in the Leno valley, above Rovereto. 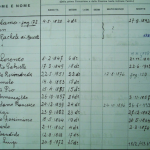 1) The Guetti family in the registry office registers 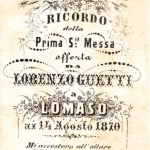 In 1878 he was relocated to Quadra in Bleggio, as a parish priest. It’s in this very period that he began to accompany an intense cultural, journalistic and social activity to the priestly ministry. He immediately understood how a definitive emigration to the Americas was combining with the seasonal migration towards the Reign of Italy and the northern European countries and he tried to protect it by proposing organisations to safeguard emigrants. He published in addition "Statistica dell'emigrazione americana dal 1870 in poi"complemented by tables referring to the quantity and the positive or negative result of this emigration for every single deanery in Trentino .

In the period between 1890 and 1892 he promoted the first two cooperative societies that shortly spread all over Trentino: the (sale and consumption) Famiglia Cooperativa in Villa of Bleggio and the Cassa Rurale in Quadra. The creation of the first consumption cooperative in Trentino is really interesting to analyse. Everything started in 1888 with the presidency of the agricultural district Consortia in Santa Croce assigned to priest don Giovanni Battista Lenzi. The agricultural Consortia dealt with supporting agricultural improvements, agricultural education, discussing and requesting to be subsidised by the Austrian-Hungarian Empire but also with encouraging cumulative purchase of seeds or agricultural stock. 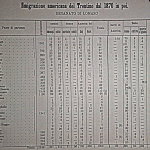 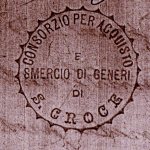 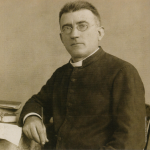 After the frost of 21st May 1887, an exceptional weather event for that season, the consortium had obtained a 700-florin grant by the Austrian Provincial Council in favour of poor farmers, “in order to buy a respective amount of wheat to be given to farmers in need for at least 10 coins lower”. At first, this position, held by the president and by the secretary of the district Consortia don Guetti, represented the minority of the council while the majority spoke so that “the consortium can buy a lot of corn with the bestowed subvention and […], it can be provided for free, through ?priests? (soul healers) to the neediest farmers”. Already in 1888 don Lorenzo had realised that with this subvention a cooperative store could be created: “this potential consortium store would have green colours of beautiful hope, because it could end up becoming a cooperative store, and you know how much I like this word, when it’s linked with the agricultural interests of our country”.

The majority’s proposition, as don Lorenzo explains, wasn't put into practice though, both because of the objective difficulties in identifying the neediest people and because the provincial Council itself had commanded to follow the minority’s ideas on the invitation of the consortium presidency. A new request of the previous minority supported the cumulative purchase of flour and “it was agreed by the consortium Delegates that the flour price was less than 2 coins/kg, that means 2 florins/quintal less than the price put in Ponte delle Arche, so that the chosen needy farmers could feel a real advantage from the rescue action undertaken by the Consortium”

The fact that the Consortium kept the cumulative selling of flour at a lower price than the market price was a success and it was repeated twice. Later, however, don Lenzi was forced to resign from his role as president of the consortium probably because of the turmoil caused by the protests of corn merchants and millers who released a pamphlet with the provocatory phrase “the subsidiary of poor people is eaten by priests”. The Consortium decided however to continue the distributions of flour: 30 tons of flour, given on several occasions, were bought for 800 needy families. Don Lorenzo was inspired and received confirmations from these experiences on the importance of engaging in the promotion of cooperative organizations and he recommended the provincial Council of agriculture to study one simplified statute in order to foster in the villages the creation of “Casse rurali” on the Raiffeisen model.

A close collaboration between the provincial Council of Agriculture's secretary Giovanni Zotti and don Guetti was thus born. While working to set up a “Cassa Rurale” though, a sales and consumption cooperative was created “by accidental circumstances”. Some landowners from Bleggio, as don Guetti himself tells us, had asked some muleteers to collect certain goods on their behalf in Trento and Riva, given the fact that the prices there were more convenient than those exerted in the villages, but shopkeepers of the villages opposed to it. For this reason, private citizens, inspired by the statutes of the cooperative stores that were brought by migrants who came back from Piedmont, founded a cooperative. Don Lorenzo Guetti’s commitment played a decisive role in this process as it shows in this article published on the paper of the time “La Famiglia Cristiana”:”two years ago I some of my friends show up and they hit me point black with this question: Father,you must do us a favour. -Which is?- this winter we were in Piedmont; we saw and felt how much good cooperative stores do there; you have to help us create something similar also here.[...]- and next Sunday, when all evening functions are over, the friends were promptly in the rectory and everything was set” […] Comparisons of statutes here, advice and counsel there, the fact is that after two months we sketched a statute that was read to the first future members[…] I consulted notaries, lawyers and even tribunal councillors, finally after one year we could introduce the statute to the approval of the members and then ask that the first cooperative society of sale or consumption of basic and more common necessity goods was registered in the public consortial Registers”.

Finally, on 28th September 1890 in Villa of Santa Croce, little hamlet of Bleggio, the “Consortium for the purchase and sale of goods in S.Croce” was established and don Guetti greeted it like this: “S.Croce, 1st October. Some good flash news. Last Sunday September 28 a sale and consumer Cooperative Society was established here with an upcoming store of essential items and collective needs. Its first Presidency was already nominated and it has to obtain the superior approval and therefore initiate an organisation of high hopes”.

Don Guetti’s intellect however doesn’t have to be seen uniquely for the encouragement of cooperative societies. Don Lorenzo suggested to poor people an awareness of their own position for improving it. This awareness was requested through their education in various fields. From a scholastic field to numerous writings in which he fostered the value of democracy. Also in the same sale of flour, promoted by don Guetti at a lower price compared to the one on the market, some pedagogical aspects come up, such as to give dignity to people making them pay a symbolic price and to share the difficult situation. The evidence of the educational objective towards the farmers’ world lies in the fact that it was the very population,on the example of the cooperative store founded in Turin in 1854, to suggest to the parish priest of Quadra to create a consumer cooperative.

Lorenzo Guetti’s greatness doesn’t lie in having invented the “cooperation” but to have supported and guided a project that was possible to realise thanks to the wide culture and the high entrepreneurial capacities. These skills made him the bulwark of the underprivileged and the trusted man of his superiors.

It was this mix that made don Lorenzo the first founder of a Famiglia Cooperativa and a Cassa Rurale. In this development he played an essential role also for his perseverance and his tireless dedication. Even before the cooperative’s establishment in Villa, don Lorenzo had supported with great difficulty the creation of cooperative organisations but, only after the process of education and awareness of the peasantry, the cooperation was successful and able to overcome people’s mistrust. (From the website www.donguettilorenzo.com)