The expression “civil economy” appears for the first time in the political-economical lexicon in 1753, when the University of Naples established the first chair of economy in the world, entrusting its entitlement to Antonio Genovesi , whose fundamental work in 1765 is entitled Lessons of civil economy.

Civil economy is based on the civic virtues and sociable nature of the human being, who is driven to meet with the other,even in the market. The typical pillars for civil economy are virtue, sociability and happiness. It’s a paradigm built on principles such as reciprocity, gratuitousness and fraternity, overcoming the supremacy of profit and proposing a “humanism” of the market and the choice of virtuous conducts in the interests of the individual and the community.

According to Stefano Zamagni, who at the end of the 90s of the last century had the merit to reintroduce in the Italian public and international debate this typically Italian paradigm, “ the most common image to explain the civil economy is the image of a triangle. At the top of each of the 3 vertices stands one of the three dimensions of liberty. As in a triangle, none of the 3 vertices has more importance than the others; in the same way you can’t establish a society and an orderly and lasting economy by eliminating one of the three vertices. Efficiency is necessary, as well as equity: however reciprocity is also essential and needed by fraternity”.

In his volume The first roots. The Italian way to cooperation (2012) the civil economist Luigino Bruni writes: “To say civil economics means to say something far much older than modern and contemporary cooperation, because it recalls at least the medieval city civilization, the civil Humanism of the fifteenth century and the Italian Illuminism (...) The Italian cooperative tradition cannot be included without placing it in the channel of the Italian economic and civil vocation (...) During the second half of the 19th century a seal that had matured for centuries in a fertile soil bloomed in cooperation, worked and looked after by a community and commercial tradition in which the genetic code of the Italian way to cooperation was created”. 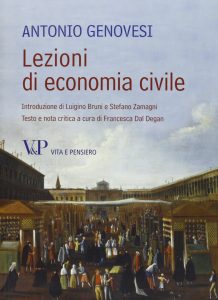 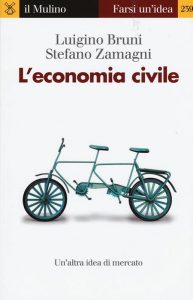