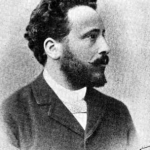 He was one of the most brilliant and alert scholars of cooperation as a phenomenon, both at international and Italian level. He graduated with a thesis on the English cooperative movement and he was among the first to academically and scientifically approach the phenomenon at an economic and ethical level.

He wrote “La cooperazione in Italia. Saggio di sociologia economica (1886)” and “Le società cooperative di produzione. Contributo allo studio della questione operaia (1889)” that addressed the scholars of the following years. For the economist of Reggio, cooperation aimed at unifying, at weaving networks and relationships, seeking a collective interest, not private:

“To highlight the very different nature of cooperation compared with that of speculation, it is sufficient to note this fact, that, while cooperative societies, in the countries where they became widespread, they unified in local, regional, national groups and probably it won’t be long in setting up international unions (there are already many clues at this time), it is rare that commercial companies (or private speculators) have come together for a common purpose; and whereas cooperatives, as they progress, increasingly tend to connect, speculative companies, on the other hand, are more isolated the more prosperous they are. All this because nature is quite different, and selfish private interest and competition in speculative companies make union impossible”.

He noted however the critical issues of cooperation in Italy, which was marginal and characterised by a strong fragmentation: because of this he lost interest in total integration, interpreting it as a form of business inspired by non-speculative values even if it is incapable of replacing the one based on profit. For him “cooperation, the child of socialism, (...) won’t follow the path of socialism at all, and by taking only what it has that is noble and great (...) it will try to realise its program by following a more modest way, a less adventurous way”.

“Cooperation is not an indigenous institution in Italy: excluding the social dairies that spontaneously appeared here too, as in other countries ”, all other forms of cooperative societies were imported from abroad”. Social dairies are, in the words by Ugo Rabbeno, associations of livestock farmers who join together to have in common milk produced by their animals, to prepare dairy products with it and divide the product in nature, or its value, in proportion to the milk delivered by everyone”. According to the motto: ”butter made by one cow is terrible; butter made by many cows is great”. 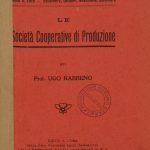 
They said about him:

Manfredi Alberti:
“Since his graduation thesis Rabbeno had proved to prefer cooperativism as his main interest of research, that then resulted also in real activism. Since the mid-1980s Rabbeno actively contributed in fact to the organisation of the cooperative movement in Italy and Europe. In September 1886 he participated as representative of the Italian cooperation to the national Congress of cooperative societies,which took place in Lyon.

Together with other teachers close to the ‘socialism of the Chair’, such as Francesco Viganòande Ulisse Gobbi, he also became a member of the committee that was a promoter of the founding congress of the national Federation of cooperatives, which was held in Milan from 10th to 13th October 1886; he would participate later as a member of the organisation and as a speaker, at all the following national meetings.

Cooperativism was born from a democratic and radical political origin, opening subsequently, at the end of the 1800s, to the influence of socialism and catholicism. Rabbeno himself had initially approached the world of moderate political cooperation, interpreting the cooperative instrument as a solution to the social issue and therefore as an alternative to the class struggle. Over time he would nevertheless approach socialist positions, conceiving cooperativism as a partial means, as a temporary stage in the development of a collective society.

As a scholar Rabbeno provided the public with important evaluations of the cooperative experience, among which “La cooperazione in Italia (Milano 1886)” and “Le società cooperative di produzione (Milano 1889)”, work that was awarded by Royal LombardInstitute of Sciences and Letters. If in his first works on cooperation a strictly empirical and inductive approach had prevailed, in the volume of 1889 Rabbeno tried to conceive a theory on cooperation, on the notion of enterprise.

The cooperative enterprise, in the definition by Rabbeno, was understood as a form of co-management of production in the collective interest of its members, that could fully deploy its virtuous effects only in a socialist-type society. By understanding the cooperative as a particular form of economic enterprise, dominated as the latter by the universal principle of profit, Rabbeno anticipated in fact some reflections by Maffeo Pantaleoni, who not by chance recognised in Rabbeno «the most educated and profound of modern writers who talked about cooperation» ”