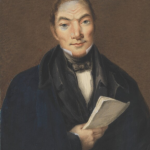 He was a Welshman, businessman, cotton trader and socialist utopian, he is considered one of the fathers of cooperativism. He was an academic of social sciences and pedagogy and he developed a vision for improving society through education.

In his factories in New Lanark, Scotland, he experimented with a futuristic management model: better salaries, life and working conditions favourable to workers, asylum and education. The formula proved to be successful;
it combined better life and working conditions to satisfactory economic results. It became a study mode for the future, almost a century early on welfare policies in Europe. Owen experimented moreover the creation of communities, both in Scotland and North America, as “cooperation villages” that for opportunistic motives, however, failed.

The scholar Ghino Valenti (1902) writes: “not many words are needed to demonstrate the deep difference between Owenian communities and modern cooperative societies. While these institutions abstained from the mechanism of free competition and aimed at creating a different social order, cooperation instead is inserted into the existing entity and is intended only to supplement the system”. 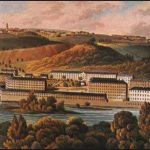 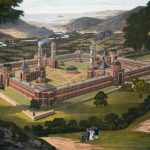 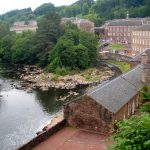 Images of the buildings in New Lanark, Scotland, where Robert Owen developed his idea of a socialist and humanitarian factory: he abolished child labour, reduced working hours and provided better accomodations for workers. He promoted various initiatives relating to education, culture and medical care around the factory.

The facility, bought in 1800, about twenty years later saw the presence of around 2500 inhabitants and it was the biggest center of cotton production in Great Britain. It was also visited by people interested in its functioning.
Picture depicting the idea of the utopian experiment of the community of New Harmony in Indiana

Antonio Magliulo writes about Owen and his experiments:
“In the era of the industrial revolution and the impetuous economic development, the social issue explodes: the capital separates and contrasts with labour. The wretched only seem to have one alternative: assistance or exploitation, resignation or struggle. Owen wants to provide a third possibility. The cooperation is conceived as an attempt to emancipate the poor, poor relief, which is different both to public assistance and to trade union action. In 1979 Owen bought the textile factory in New Lanark. That very year he married the daughter of the ex owner, David Dale. The factory is a symbol of the genetic link between welfare culture and cooperation..”

Enzo Pesciarelli:
the productions of New Lanark had begun to work under the direction of Dale in 1786, using the work of about 500 children between 6 and 7 years of age, coming from charity institutions or workhouses. Dale intends to free the children from “vice and misery”. Owen follows his predecessor’s example.
New Lanark becomes a model factory where to experiment new social relations:”like the adoption of shorter working hours both for adults and for children, compliance with hygiene standards in the workplace, the establishment of factory outlets which would sell basic necessities at low prices, the construction of houses for workers who could acquire the property, the establishment of schools for workers and their children, the prohibition to bring to work children under the age of 9”. In 1817 there was a turning point. Owen plans to create a network of cooperative villages to regenerate society from the bottom.
In the villages private property is abolished, the goods are sold at cost prices determined on the basis of the working time required to produce them, the distribution of income occurs according to egalitarian principles. An economy that is alternative to the market one. To the conservatives, Owen is now a subversive. The villages lose support, even financial, of rich philanthropists. And one by one fails miserably. The last attempt, that didn’t succeed, was made by Owen in the US with New Harmony”