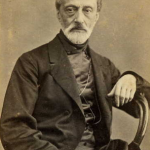 He was a politician and a philosopher, one of the most significant personalities of the Italian Risorgimento and one of the recognised founders of the Italian cooperativism. His person and his influence are located in the period of origin of the workers’ movement, union movement and cooperative movement.

In 1860 he wrote his fundamental text “Dei doveri dell’uomo”. We can read: “we must not abolish property because today it belongs to few people; we must open the way so that most people are allowed to buy it. It must be based on the principle that makes it legitimate, making sure that only work can produce it”.

The category of association became in fact an important cornerstone of Mazzini’s way of thinking: men had the task and duty to tend to fraternity, and the association was a means to achieve social harmony, through which workers could carve out more and more social economy spaces. The associations were meant as a way towards a society without conflicts, in which, unlike the marxist vision, private property, social differences and the river-bed of the nation were perceived as a framework of themselves.

He writes: “multiply the associations and bring together industry workers with landworkers, city with village. Try to increase especially the consumer cooperatives and have faith”
And further: “the associated work, the distribution of the outcome of work (...) in proportion to the work done and the value of that work: this is the social future. That is the secret of your emancipation (of Italian workers). You were once slaves, then servants, then wage-earners; you will be soon, provided that you want it, free producers and brothers in the association (...) This transformation, by emancipating you from the slavery of salary, would begin a new time and improve the economic state of the country”. 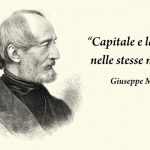 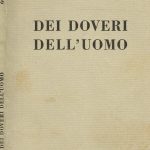 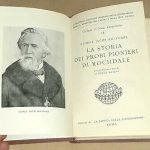 Friend of the great English cooperative members, in particular of Georg Holyoake, Mazzini dedicated himself therefore to the first labouring associations in Italy, the “Società Operaie di Mutuo Soccorso”, based on the voluntary and mutual contribution of the members, aimed at a universal fraternity.

In 1842 in “Condizioni e avvenire d’Europa” Mazzini notes: “it is not about destroying, removing,violently transferring wealth from one class to another: it is about expanding the circle of consumption, consequently increasing products, giving a wider part of the allotment to those who produce, opening a wide way for the worker, so that he can buy wealth and property, making sure that every man, who gives security of will, capacity, morality can find a capital and way of free work”.

In a letter of 6th March 1862 sent to Georg Holyoake, Mazzini writes: “concerning cooperation, that means the creation of associations of voluntary workers who produce by using their own capital and therefore get all benefits of production and set work as the basis of property, not only I preached this, before all the French socialist jabber, as far back as 1832, but I continue preaching it even now and working to this end in Italy, much more than all founders of systems in France. This is my principle: the capital for production belongs indivisibly to the Association- profit have to be distributed according to the work done and constitute the individual belonging of every member”

In his important book “Scritti politici ed economici“ he wishes for “the reorganisation of work, in the form of association as a replacement to the current wage system, we believe, to be the basis of the future economic world. And among these possibilities, one that by the good of the middle classes, could - in this period of transition - lead to the intent, is allowing artisanal producers to participate in the company profit”.

The “Associazione Mazziniana Italiana”, created in 1943, is entrusted with the moral and political heritage, the mindset and writings of Mazzini. www.associazionemazziniana.it


We report the incipit of his most famous book “ Dei doveri dell’uomo (1860)”, considered by many as a moral Bible: “ I want to talk about your duties. I want to talk, as my heart tells me, about the holiest things, that we know about God, about humanity, Homeland, Family. Listen to me with love, as I will speak to you with love. My word is a word of belief that has matured by long years of sorrows and observations and studies. The obligations which I will show you, I try and will try, as long as I live, to fulfil them, as much as my forces grant it.
I can deceive myself but I cannot deceive you. Hear me then fraternally: judge freely among yourselves, if you think I’m telling the truth: abandon me if you think I pray failure; but follow me and work according to my teachings , if you think I’m an apostle of truth. The error is a misfortune to pity but knowing the truth and not conforming your actions to it, it is a crime that heaven and hell condemn.
Why do I speak to you about your duties before speaking about your rights? Because, in a society where everybody, voluntarily or involuntarily, oppresses you, where the exercise of all rights that belong to men is constantly stolen, where all miseries are for you and what is called happiness is for men from other classes, I talk to you about sacrifice and not achievement? about virtue, moral improvement, education, and not about material well-being? It is a question that I have to clarify, before keeping on, because in this note lies the difference between our school and many others that lecture today in Europe; and then because this is a question that easily arises in the angered soul of the suffering worker”.


They said about him:

Alberto Basevi: “he was one of the great thinkers, whose influence doesn’t decrease, but increases not only in Italy but also abroad. Giuseppe Mazzini was a friend of the great English cooperative members, Holyoake at the top. He set out the outline of the cooperative becoming since 1842 and that is even before the classical experiments of Rochdale, predicting the emancipation of workers through the association and freedom pairing and warning them against socialist and communist tendencies, that would bring irresponsibility, ruin or at least to a life as beavers and not as men”.

Carlo Romussi: “We, who have white hair, love Mazzini because he was our first educator; and how many tears of tenderness, love, rage and hope he made us cry! Upon his pages we still throb and dream: he is the great master of law and duty, the one makes you fall in love with sacrifice. One understands how, fascinated by the words of the master, the disciples, who despised the comforts and pleasures of life, rejoiced, in the name of an idea, towards death: one understands the conspiracies woven between a hundred dangers, the braveries in prisons, in front of gallows and in the open battlefields of young people who grew up with his word, and who then became confessors of the faith of Italy"