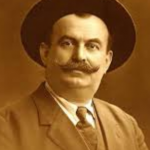 Born in Fontanelle, close to Parma, he was one of the leading representatives of cooperativism in Parma. He had socialist ideas, contributed to the organisation of the trade union movement and farmers’ league movement, encouraging the workers’ efforts at cooperative level, efforts of alphabetisation and support, according to a design of “full cooperativism”, similar to the Reggio model established by Antonio Vergnanini.

Margherita Becchetti writes: “he dreamt of a full cooperation, an economic network in the workers’ hands, alternative and competitive with market rules dictated by the agrarians, made of cooperatives, consortia, and laboratories, where work was equally paid, prices were under control and profits reinvested in social goods. And based on this dream he founded his tireless activity of political leader, union official and cooperative member, first in a liberal Italy and then in the French exile during Mussolini’s dictatorship, until he joined the social democratic Party”.

When fascism began the cooperative organisation in Fontanelle was hardly hit and Faraboli escaped to France where he committed again to supporting the formation of cooperative projects. After coming back to Italy he received the “Star of meritorious Italians abroad”, however he failed to fit in the new-changed- socio- political context and he lived a period of isolation until his death.

Defined by the compatriot Giovanni Guareschi “clear and honest face”, although being among the leading personalities of the history of the working movement in Parma, he died alone at the ”Ospedale degli Incurabili”. 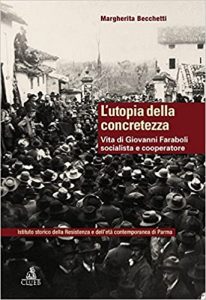