It’s a document approved during the Centenary Congress of the International Cooperative Alliance, held in Manchester in September in 1995. It gives a definition of cooperation:
“an autonomous association of individuals who unite voluntarily to satisfy its own economic, social and cultural needs and its own ambitions through the creation of a society of common property and democratically controlled”. 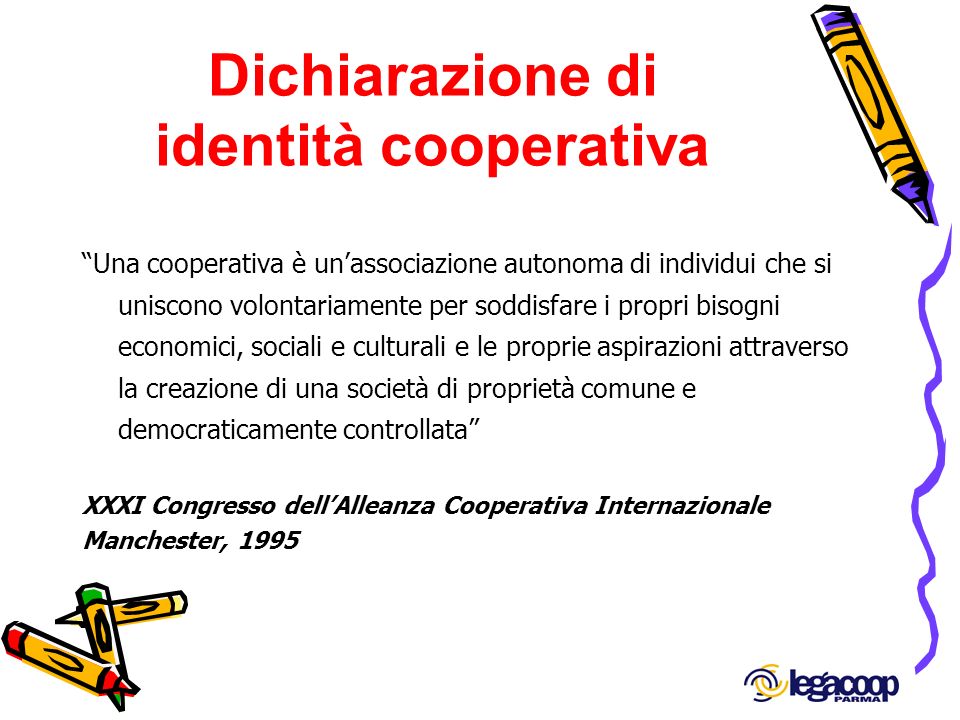 It outlines its values: “the cooperatives are based on the values of self-help, democracy, equality, equity and solidarity. The cooperatives’ members believe in the ethical values of honesty, transparency, social responsibility and care for each other”. It defines seven principles through which the cooperatives can put the above values into practice:

1. Free and voluntary membership
The cooperatives are organised voluntary open to all people who are able to use its provided services and willing to accept the responsibility connected to the membership, without any sexual, social, racial, political or religious discrimination.

2. Democratic scrutiny by members
The cooperatives are democratic organisations, controlled by their own members who actively participate in policy-making and in the assumption of relevant decisions. The men and women who are elected as representatives are responsible towards the members. In first-degree cooperatives, members have the same voting rights (one person, one vote) and also cooperatives at other levels are equally organised in a democratic way.

3. Economic participation of members
The members contribute equally to the capital of their own cooperative and they democratically control it. At least one part of this capital is, usually, common property of the cooperative. The members, usually, receive a limited remuneration on the subscribed capital as condition for the membership. The members give the profits to some or all of the purposes: development of the cooperative, possibly creating supplies, part of which should at least be indivisible; provision of benefits for the members in proportion to their agreements with the cooperative itself and sustain to other activities approved by social basis.

5. Education, training and information
The cooperatives commit to educate and train their own members, elected representatives, managers and the staff, so that they are capable to contribute efficiently to the development of their own cooperative societies. The cooperatives have to put into place information campaigns aiming at raising awareness of the public opinion, in particular of the young people and the most renowned opinionists, on nature and the benefits of cooperation.

6. Cooperation among cooperatives
Cooperatives serve their own members in the most efficient way and reinforce the cooperative movement by working together, through local and national, regional and international facilities.

7. Commitment towards the community
The cooperatives work for an enduring and sustainable development of their own communities through policies approved by their own members. As the economist Mario Mazzoleni highlights, the seven principles, established by a commission of ICA experts, make up “non-binding rules, they are not sources of law in a technical sense, but they help to identify the minimum model of mutual organisation for the legislator of the member countries and for the international cooperative movements”.

According to Ivano Barberini, “based on that declaration, the enterprise isn’t a goal but a means to realise the purposes of the cooperative that identify with answers to cultural, social and economic needs (..) The Declaration gives a general structure in which every kind of cooperative can work and also observes the values and basic principles currently in force (..) The basic principles are vital organs, essential to ensure the identity and survival of an organisation. For this reason to change or to disregard the basic principles means to affect the very nature of cooperation”.

The 7 values originate from the first successful cooperative experience, the one of the Rochdale equitable pioneers society. ICA, after 1895, revised their definition 3 more times, almost every thirty years, in 1973, in 1966 and in 1995. 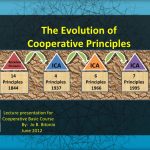 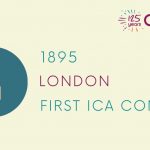