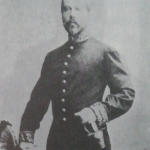 With aristocratic origins, he was born in Trento in 1845. He attended the university of Padua where he graduated in mathematics. He focused on agrarian problems even if in the interest of the family that owned vast estates. In 1886, following its establishment by the Assembly of Innsbruck, he was nominated president of the Provincial Council of Agriculture directly by the emperor.

The company had to provide economic assistance to farmers and promote the cooperative organisation of the industry. In collaboration with the Agrarian Institute of San Michele, he promoted the creation of itinerant chairs that taught the abc of agrarian technique to farmers of the valleys in Trentino. He organised the first “Exhibition of oxen” and the first “enological Congress” of Trentino.

His presidential role within the provincial Council of Agriculture of Trento was functional to the collaboration that was always more profitable between cooperative movement and Council itself, a source of logistic, economic and administrative support. He had a progressive, pro-German and catholic approach, he collaborated therefore actively with don Lorenzo Guetti for the launch of cooperation in Trentino.He indeed specifically recommended don Guetti as first president of the Federation of Cooperative Consortia established in 1895, of which he was vice president, giving up himself on that office. He was definitely against the confessional tendency that, after the Rerum Novarum emanation by Leone XIII, was rapidly expanding, he was excluded by the cooperative movement after the death of the founder, which happened in 1898.

Massimiliano De Mersi was defined by professor Urbino Colombini “the spirit of our agricultural awakening”, for his dedication all-round in the organisation of the agricultural and cooperative field. He died on 18th December 1935 in Villazzano.