He was the priest of S.Croce of Bleggio from 1883 until 1916 and a friend of don Guetti. From 1888 he was president of the agrarian district Consortium through which he fostered an action of distribution of flour under the market price, first step towards a cooperative store, and the establishment of the hospital-hospice of Santa Croce.

The collaboration between Lenzi, don Guetti and teacher Daniele Speranza was the basis of the creation of the first cooperative of sale and consumption in Trentino, established in Villa of Santa Croce in 1890. On the website www.donlorenzoguetti.com, edited by the historian from Giudicarie valley Giorgio Corradi, you can analyse the human and professional bond of the two priests from Giudicarie, who played a big part in the creation of the cooperative experience in Giudicarie and here in Trentino.

Corradi writes: everything started in 1888 with the presidency of the Consortium of Santa Croce in the care of priest don Lenzi. After the frost of May 1887 the Consortium obtained a 700-florin grant by the Sublime Provincial Council for poor farmers, “in order to buy a respective amount of wheat to be given to farmers in need for at least 10 coins lower”. At first this position, held by the president and by the secretary don Guetti, represented the minority of the council while the majority spoke so that “the Consortium can buy a lot of corn with the bestowed subvention and […], it can be provided for free, through the priest to the neediest farmers”. The majority’s proposition, as don Lorenzo explains, wasn't put into practice though, both because of the objective difficulties in identifying the neediest people and because the provincial Council itself had commanded to follow the minority’s ideas on the invitation of the consortium presidency. A new request of the previous minority supported the cumulative purchase of flour and “it was agreed by the consortium Delegates that the flour price was less than 2 coins/kg, that means 2 florins/quintal less than the price set in Ponte delle Arche, so that the chosen needy farmers could feel a real advantage from the rescue action undertaken by the Consortium”

The fact that the Consortium kept the cumulative selling of flour at a lower price than the market price was a success and it was repeated twice. Later, however, don Lenzi was forced to resign from his role as president of the consortium on 21st April 1888 probably because of the turmoil caused by the protests of corn merchants and millers. The Consortium decided however to continue the distributions of flour: 30 tons of flour, given on several occasions, were bought for 800 needy families. Don Lorenzo was inspired and received confirmations from these experiences on the importance of engaging in the promotion of cooperative organizations and he recommended the provincial Council of agriculture to study one simplified statute in order to foster in the villages the creation of “Casse rurali” on the Raiffeisen model. A close collaboration between the provincial Council of Agriculture's secretary Giovanni Zotti and don Guetti was thus born.

During WWI don Lenzi was among dozens of priests who were arrested and exiled to Austria because of irredentist ideas. The priest was arrested during a Mass and sent to prison on 31st March 1916, first to Tione and then to Trento. He was sentenced to two years in prison, to be served in Salzburg. Being sick, he was moved to the hospital of Innsbruck the year after, where he died on 26th October 1917. His remains were repatriated by the parishioners on 26th April 1919 and now they rest in the cemetery of S.Croce. He was remembered in his memoirs by the teacher of Comighello Daniele Speranza: Don Lenzi, although sometimes unrequited, was really the Apostle who dedicated his entire work to the best good of his parish.

He says that he expects his salary to be higher, because the evil ones were not lacking in this world, so as they won’t be lacking in the future, after all he feels the consolation of having done his duty. And indeed how many recriminations for the hospital! How many obstructions didn’t move to annihilate its realisation? How many changes of mind of people who were supposed to support such an important operation! He says that where there’s a will there’s a way, and so not caring about the setbacks and rumors, he had the consolation of seeing the house of the poor open (the hospital), completed and with its existence assured by a good endowment fund. 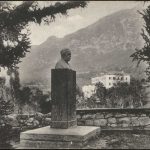 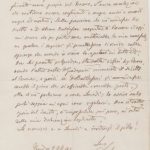 Santa Croce of Bleggio, monument to the patriotic priest don G.B.Lenzi, 1911
Don Guetti’s original letter to the priest Giovanni Battista Lenzi concerning his transfer from Quadra to Fiavé in 1893. Source