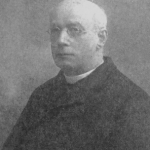 He was a colleague and a fraternal friend of don Lorenzo Guetti since the seminary in Trento and he worked as a professor of dogmatic theology. He promoted the “Famiglia Cooperativa” (cooperative society) and the “Cassa Rurale” (credit institution) in Vigo Lomaso in 1895.

Here are some of the paragraphs of the funeral oration to don Lorenzo Guetti, read by don Geremia:
“Please allow this needed vent to those born, raised, educated and who lived with him, they still can’t get over this pang they felt, they still don’t know how to recover from the costernation of the news of this huge tragedy (...) He was a man of action par excellence: he had an eminent spirit of initiative, an enthusiasm for business. When a work appeared to him and it seemed good to relieve people, he took care of it and plunged into it: he didn’t mind difficulties, thorns, hitches. He understands the Cooperative and, without any racket or argument, he establishes one in Quadra: the idea takes root and it shows excellent results: it spreads, it expands from Quadra, and shortly it branches out all over the Trentino region (...) His rectory was always, literally, besieged (...) When a month ago the art expert told him about his inevitable death, at my presence, he wasn’t troubled, he wasn’t discouraged, he didn’t lose his good mood, his serenity of mind (...) He was always a determined propagator of legitimate rights of our homeland and nationality; and he gained respect even from men of different beliefs. Opportunism, a parasitic fungus (cryptogame) that infects today’s life, was instinctively horrified (...) His hospitality was proverbial, his disinterest unparalleled. He died poor, though he didn’t lack resources, especially during these last years; and this is his best praise (...) As a man, as a writer. His writings were numerous, popular, vivacious: he wrote to educate people about several topics; he generally developed in journals those ideas whose actualisation he was taking care of (...) Dearest don Lorenzo! It’s been five days since, in parting, you told me: “see you, over there”- and you meant in Trento: that wish didn’t come true. In my turn I tell you: see you in this cemetery, where I want my bones to rest next to yours; see you up there, where the separation is forbidden: and the omen won’t hopefully fail”.